Last Wednesday a fire broke out at Arroyo Seco, near the junction of ArroyoSeco-Indians Road and the road to the adobe.  It was reportedly brought under control relatively quickly through aircraft retardant drops and the local USFS fire crew.  I went out to see the aftermath.

Not knowing how extensive the burn was, I went out on the Camp Cawatre Trail and hiked up the ridgeline firebreak put in for the Soberanes fire.  Got all the way to the top without any burn apparent, but finally on the way down could see some pink fire retardant at the very end of the firebreak.  I had been expecting something larger!  The photo below shows the retardant drop between two sections of the ArroyoSeco-Indians Road (note: clicking on any image below will display a larger size) 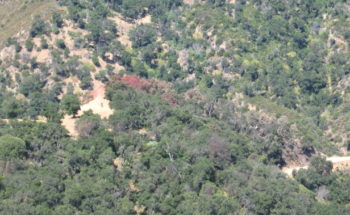 Reaching the end of the bluff, I could see extensive burn on the slope below but relatively little on the bluff itself.

Going down to the Camp Cawatre road gave another perspective 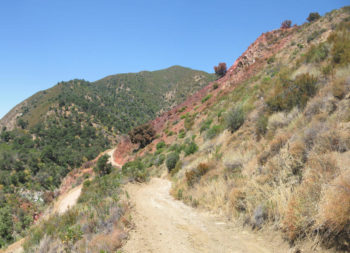 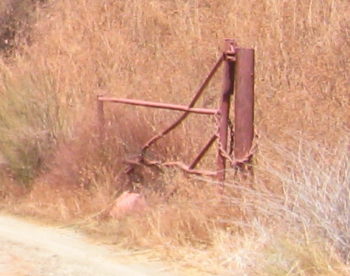 And then along ArroyoSeco-Indians Road. 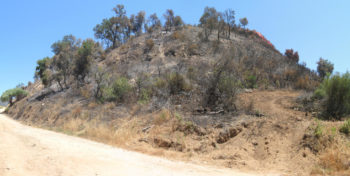 What surprised me was finding that all the burn was above the road.  I could see retardant below the road, but nothing burnt.  When I first heard the report I had assumed the fire likely started near the river from a fire someone had built at one of the many swimming spots there – but this fire seems to have started above.  Perhaps a cigarette thrown into the grass by the road??  Or firecracker?? Or, though it seems unusual, I’d wonder if the fire was built on the top end of the bluff and carried by the wind downslope.  The VWA is having a cleanup event along the river this weekend which will bring in some fire-experienced people who perhaps can make better sense of this.  The burn area did not encompass the Santa Lucia Trail at all.

A dozer had been brought in to clear the ArroyoSeco-Indians Road of the slides that had developed after the spring rains. 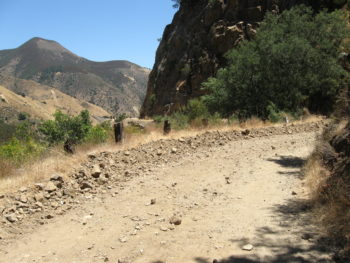 All in all it was interesting seeing the burn damage and suppression efforts.  But for me the most enjoyable part of the hike was its beginning.  Since this was a leisurely hike, I took the “Abbott Lakes Low-Water Usetrail” and spent some time just sitting and watching the activity at the lake.  I’d started early to avoid the heat, and in the still morning damselflies were fluttering, birds were feeding, and frogs were croaking.  I was alone and could stay as long as I liked.  Reminded me of times I did the same when I was growing up, when life did not seem as hurried as it often does now. 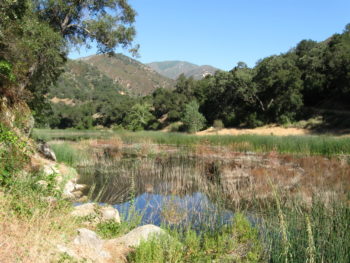