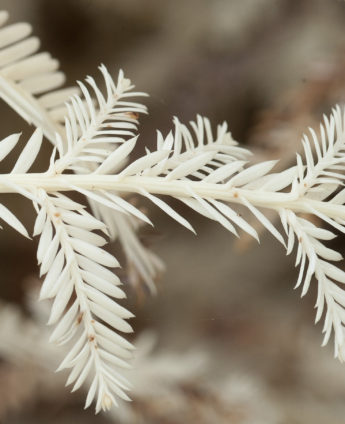 I doubt you’ve seen a white plant. “Plants” (here used in the “strict sense”, aka Viridiplantae, which excludes fungii among others) use green chlorophyll to produce the energy they need to grow and thrive.

Unless they can get their nutrition elsewhere …

While coast redwoods produce cones and seed, their germination rate is very low.  So most redwood trees have grown from sprouts formed around the base of a parent tree, initially dependent on nutrients from the root of the mature tree.  Although shallow, redwood roots can spread to 100 ft.  Those further from the parent get more sunlight to aid growth, so adult redwoods often form circular “fairy rings” created by clonal sprouts from an original parent.

But clones can have still have genetic mutations.  Coast redwoods have six sets of chromosomes, unusual for a tree – in fact, the only such conifer.  That makes for a wide genetic diversity and higher chance of mutation.  And recent studies have indeed found genetic variations in fairy ring clones.*

And sometimes those mutations produce something unique – an “albino redwood”.  Lacking green chlorophyll, their needles are white.  Since they cannot produce their own nutrition, unlike ordinary “green” clones they remain dependent on their root connection with the parent tree.  So their growth is marginal and most albino redwoods remain more bush-like than tree-like.

But there are exceptions – albino redwoods which are “tree-like”.

Once while passing a Ventana Wilderness gully, Paul Danielson mentioned an albino redwood grew upstream.  He didn’t say more, so one day I went out to see what was there.

Was I surprised! I’d seen a few albino redwoods before – but all were “bushes”, though sometimes large.  This was a truly white “tree”, over 20 feet tall.  Reminded me of a flocked Christmas tree.  A wonder of nature.

Afterward, I remained amazed that something so unique existed – even used its photo on Christmas cards one year.  A fond memory.

So this year I read with alarm reports of a fire in that gully.  Not hearing the extent of the fire or how hot it burned, I held out hope the albino might have survived.  A few weeks after the fire, I went to see for myself with hope and trepidation.

Given the title, you will anticipate what I found.  The albino had been seared rather than burnt – the heat killed its branches and all were brown.  I remembered reading a plea to not to cut branches for souvenirs since, like a green redwood, they would just turn brown when dead.

Sad, very sad that something so unique was now gone. 🙁 Especially since it resulted from a careless someone’s campfire.  Others, including college botany classes, have been viewing that albino for decades – but those opportunities are now lost.

Severely burnt redwoods respond by upping their growth hormones, sprouting green everywhere including their trunks.  At the base of the dead tree I found numerous albino shoots had developed post-fire.  Perhaps another large redwood tree will grow there someday.  Not in my lifetime, but hopefully for future generations. 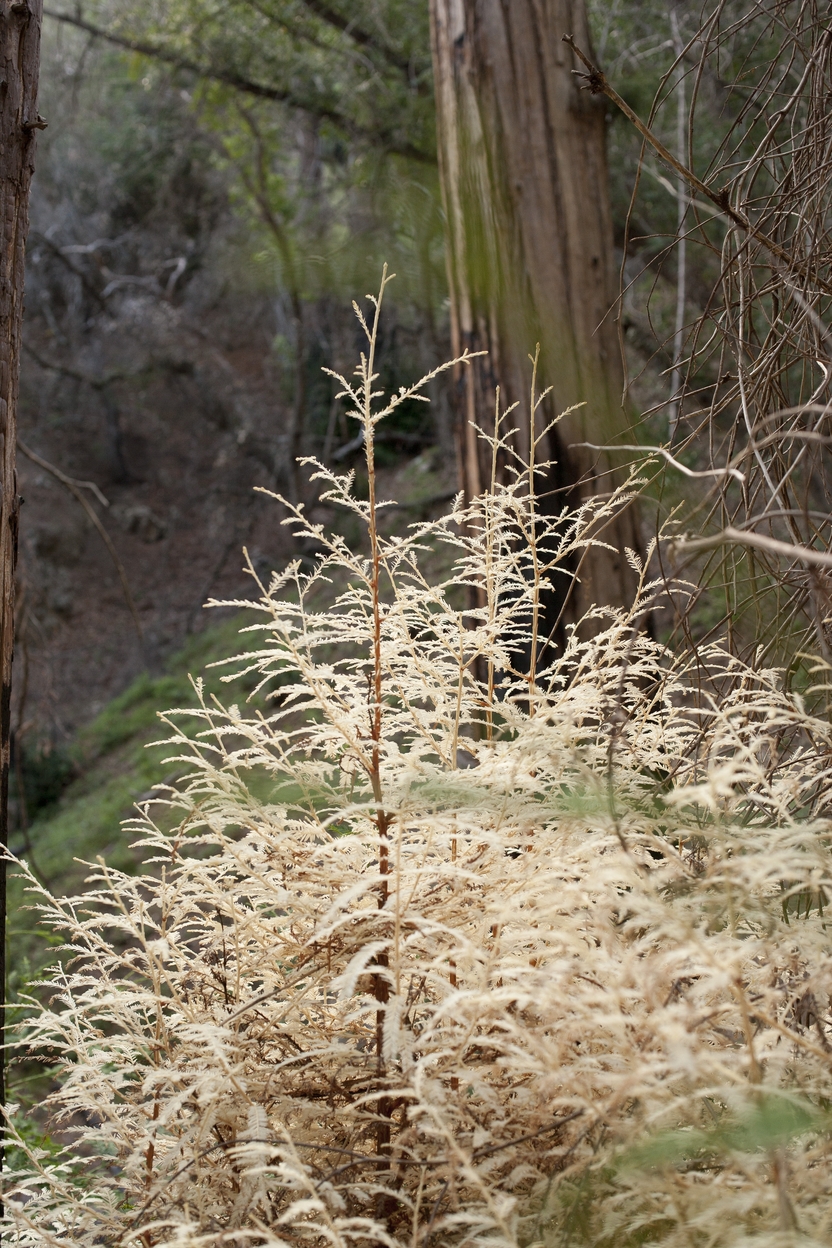 steve e. miller – new times, san luis obispo, ca
For a 2021 article on albino redwood research, including white & green “chimera” redwoods:   Rare Albino Redwoods …
Some do not consider albino redwoods as parasitic, just exceptional branches of the parent tree.  I can understand this viewpoint for “bushy” albinos growing beside the parent trunk, as many are – but when I see a tall vertical trunk radiating numerous side branches, I call that a tree.  If green, I suspect it would survive without the parent tree – but the key factor would be whether it had developed its own roots in addition to the parental one.
in this day of social media, albino redwood tree locations are guarded, to keep them from being inundated by the curious.  So I will not be giving a location.
* http://www.genomenewsnetwork.org/articles/08_00/redwood_genome.shtml